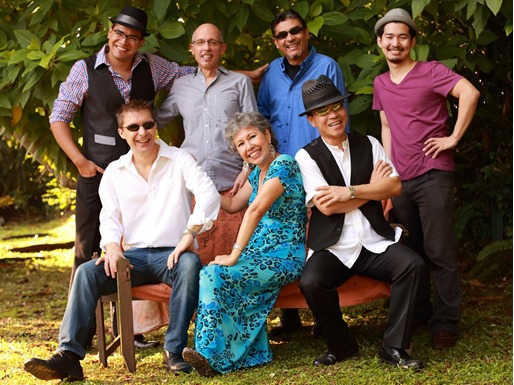 If you would like to be informed of our upcoming performances, please write to me, Susan Harmer at suharmer@gmail.com with your name and email address and I will put you on our friends of Tropic Green list. I promise I will not send you tons of rubbish.

(4 horns, piano, bass and drums) which sometimes extends to an 8 piece band with the addition of a guitar. The band was formed to showcase Susan Harmer's compositions.

Though mostly from Singapore, members of the band hail from, Cuba, Japan, Mexico and the USA.

The band has received excellent reviews wherever they have performed both for their musicianship and also for the original material that they play.

Regan Wickman, American trombonist: "The compositions have real depth of harmony, reflecting the tonal colours of the various instruments in the band.  Lush voicings and delicate phrasing give her ballads an emotive quality that is unlike anything else happening on the Singapore music scene today."

Greg Lyons, British saxophonist/composer: "I was very impressed by your writing and the band sounded great. If there was any justice in the world, you’d be working a lot as a writer.”

Ian Patterson in a review of the Borneo Jazz Festival in all.about.jazz. : “ Her skillful arrangements created a beautiful group voice while allowing the individual musician to shine...as with all the compositions, it was the rousing collective voice—shaped by Harmer— that stood out, winning over a delighted crowd.”

Tropic Green has been awarded grants by the Singapore International Foundation and the National Arts Council to participate in the following international jazz festivals:

In 2013, Susan Harmer was awarded a full grant by the National Arts Council to produce Tropic Green’s first EP Jazz From The Tropics.

In October 2014, Tropic Green performed at the Singapore Jazz Festival.

The band will perform at Jazzmandu in Kathmandu, Nepal in October 2014.